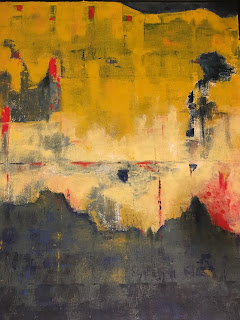 Recently I was chosen to exhibit a painting at THELMA Center for the Arts in their "Member Spotlight" project. The painting is one I did some time ago and recently tweaked.  I have always liked it, though it is an odd one.  Strange and eerie and one straight out of my imagination (I guess.)
I never begin with an idea when painting or writing and only come up with a title after staring at the finished piece for a bit.  This one is titled "Color in the Myth"  I remember starting with my favorite color, yellow ochre laid on over a deep blue-black surface. While fiddling with the composition a wall of buildings suddenly seemed to surface. From there came more compositional tweets and it was finished.  The painting reminds me of my time in the Middle East where my daughter lived--Morocco and Egypt, and has the basis of story in the foreground.  I called it "Color in the Myth' to invite the viewer to come up with their own story.  it was great fun!

Yesterday I  finished reading the excellent "The River of Consciousness' by Oliver Sacks.  It's a group of essays published just after he died.  He is a favorite of mine, and everything he writes about has depth and interest for me.  One chapter "The Creative Self" examines memory, story and myth.  You can see why it speaks to me.  He says, "Storytelling and myth making are primary human activities, a fundamental way of making sense of our world."
I agree.  My poetry and writing works in much the same way.  I see something or someone and create a story. At one point I was on the subway in NY and watched a man and a young girl interact in a very loving way.  Here is the story I derived from that scene.

Every other Saturday she came in on the subway from Queens. As assistant curator at the

museum she was required to work in the lab two Saturdays a month.  The museum room she

occupied was a cool and soothing windowless place. The crowded train made her skin itchy

She invented a travel game to fend off the boredom of the ride. The game was to see how quickly

she could strip a human figure of skin and fat, down to its bones. She’d studied sketches of

mummified kings and qπueens, had developed a knack for imagining them fleshed out, fully

dressed. Her Saturday exercise switched the game around.

A thickset, red-faced man and small child sat across the aisle. The girl was tiny with dark braids

that just touched her shoulders, shiny, as though oiled, carefully tied, not with ribbons but with

string, the kind of string used to truss a leg of lamb in a butcher shop. He was a large man and

The man held the girl’s hand with a gentle fatherly reverence, her fingers snug in his big hands.

A small scar curved across his left eyebrow, another thin, calloused line circled his index

finger—a cut from another time. They both are blue eyeed and bear similar smiles. She must be

his daughter. A butcher’s daughter. They live above the shop.  It’s a Saturday outing. The sign in

his window says CLOSED. The regular customers are annoyed.

She will leave them alone. Today, she will look out the window and name the trees.


So if anyone is reading this blog, would you please come up with a story today.  I'd love to here it.  My email is mkwehner@icloud.com.  If i can do it, you can do it.
Posted by Unknown at 12:03 PM